For years together, there was one thing which challenged and continues to challenge the best minds in the world. People of all ages have tried their best to get to the crux of it and expose the hidden mysteries that it conceals, but they have failed miserably. It occurs in a strange way. It gives everyone a sense of victory, of having conquered it and lets people bask in rays of their success and finally it unveils the truth. It boasts to the whole world that it is invincible and can never be conquered.

There is an air of enigma that surrounds the letter X.
Read More... »
By Ashwini C N 14 comments: 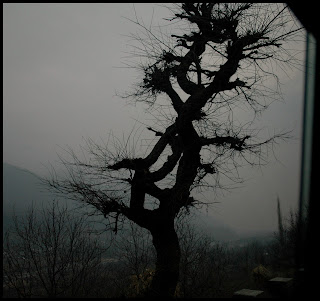 This picture of a Willow tree was shot near Pahalgam, during my Kashmir holiday in December 2012.

When I look at this, I am reminded of the famous Whomping Willow.

For all those Muggles who are clueless about what this is, a Whomping willow is a magical plant which would attack anyone and anything that comes near its branches. You can find it in Hogwarts School of Witchcraft and Wizadry.

This article has been published in Deccan Chronicle. Read it here.

I am not sure whether I have to blame it on the omnipresent social media, but I've noticed a new trend that has been catching up. I am not sure if I’m surrounded by a wave of achievers or by people who falsely claim to have achieved something. I've written and reviewed a few LORs and SOPs for a few people whom I've known and I was surprised to see a version of people in the written format, something which I probably failed to notice when I was with them. It seems very confusing.

At some point of time in our lives we would all been asked to describe what our idea of Utopia is. Naturally we would have outlined all parameters which we hold in priority. When I decided I would write about Utopia for this vowel, the ideas kept pouring in, but just one of the made sense. Anyway, I’m going to share a shortlisted version, a few of them which I feel would play an important part in my Utopian dream.

To sleep with a time turner. For instance if I wake up and do not feel fresh enough, I could always use the
time turner, go back a few hours in time and sleep again. This can go on till one is wide awake.


To laugh without having to bother about anyone.

To communicate my thoughts exactly, when I’m not in the mood to speak, so that people would leave me alone without bugging me with questions.

To own a wonderful beach house in one of the most scenic spots in the world.

To drive my car in a more classy way.

To revive the dancer in me

To act in at least one good play. I am a fan of theater.

To travel around the world, or at least to the most important places.

To be regarded as one of the best writers/speakers.

To read other posts in this challenge, click here
By Ashwini C N 27 comments:

The day I knew I was getting an iPad, I was very excited.More excited than I was when I was getting my first video game. It's not a big thing now, but way back then it meant a lot. So I was reading about what were the best apps for the iPad. I decided I would download the Quora app, read a lot more with the news websites, and make sure I was gaining knowledge and use the iPad in a productive way.

Sounds nice, right? Yes. Except that none of these actually happened.

After I got to feel the iPad and after I was done with admiring my new toy, I had to leave for work. So I asked dad to download a few apps, gave him a few suggestions and I also told him to download Temple Run. I remember him asking me what it was and I clearly remember telling him, it was just another game.