Dad is frequent traveler. Since he is in Sales, most of the time he would have to travel around to visit his customers. Invariably, I would not be aware of which city/country he is in. Every Morning and Night he makes it a point to call mom and speak to her. Now, I don't have any problem with the husband and wife having their own conversations. What bothers me is, Most of the time, dad would call mom in her mobile, speak to her and hang up. He would enquire about me, and it would stop there, unless there was something really important.
Read More... »
By Ashwini C N 52 comments:

Email ThisBlogThis!Share to TwitterShare to FacebookShare to Pinterest
Labels: Events, Family, Humor, Me

When some people just can't stop bothering You!

The other day, someone I know, happened to notice that I was furiously typing in my mobile. He was curious to know what was holding all my attention and I told him I was replying to a friend's status message on Facebook. He smirked. "Oh, Facebook eh ? ", was his reply. I did not reply and continued as if I did not hear him. After a while, his curiosity got the better of him and he asked me what exactly I was writing about. It was my turn to smirk and I showed him what I was writing. He then asked if he could go through my profile, Since he was/is not in my friend list. I could not see anything wrong in that, so I gladly obliged. I handed him my mobile and I did not get it back for almost an hour. While returning he said,

"Ash, I never knew you had so much time to spare. But if you ask me, I'd say you are wasting your time on this. Just look at your Updates and the numerous links you've shared. I don't think it is worth the time."

Email ThisBlogThis!Share to TwitterShare to FacebookShare to Pinterest
Labels: Life, Me, Random

Like every other kid in my country, when I was young, I used to get excited when I heard the sound of an airplane passing by, and I would run over to the balcony  and wave my hand. I remember those days, when I used to wonder how so many people could fit into something which was so minuscule. And how something could make so much of noise when it was flying. Come on, birds did not make such a huge amount of noise and so I realized there was something fundamentally wrong with the whole concept.

Of Random Conversations with the Soul #2


Recently, I had written about what makes one truly happy here, Of Random Conversations with the Soul #1

The reason, I was at Home! Home Sweet Home!

I love being at home. From Mom's food, to my Rocking chair , My eternally well stocked Fridge and My swing I love the place so much that I really don't feel like going out most of the time. I mean, it's all there here, why would I even bother going out?

Email ThisBlogThis!Share to TwitterShare to FacebookShare to Pinterest
Labels: RandomConversations

Of Shopping Escapades and More!

I was going through the papers and found the entire space flooded with advertisements. There was a Sale in every known Brand of Apparel which My sister and I used to frequent. We used to make sure we dropped in to look at what was in Vogue.  Today, sitting alone here and glancing through the advertisements, I couldn't help missing my sister. It's days like these that makes me miss my sister all the more. Though we talk regularly and stay in touch through our weekly Skype chats, virtual world can never bring the same happiness which the real world brings. It might offer some consolation, but it can never compensate.

So, here I was, sitting in Chennai, far away from my sister and thinking of those wonderful days. Some of our shopping escapades still remains fresh in my memory.
Read More... »
By Ashwini C N 28 comments:

Aiming for the Sky?

The other morning, on my way to work, I cam across this vehicle near Anna University, at the point where the flyover starts/ends. The driver probably wanted to take a shortcut . He would have been really  desperate to reach a higher position figuratively, and literally too. 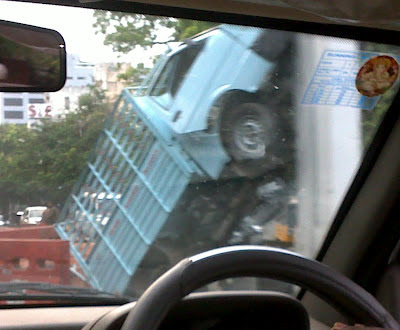 But, Don't we all know, that there is no shortcut to success. Even if there is, the results would be somewhat similar to the one in the below picture. 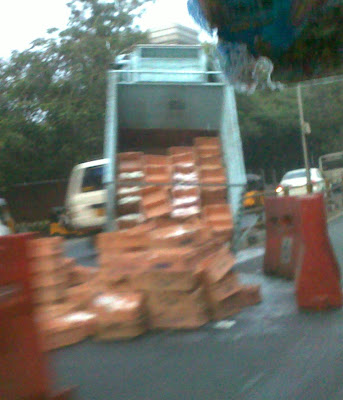 Again, I was on my way to work and could click this only with my mobile. So do not mind the quality!